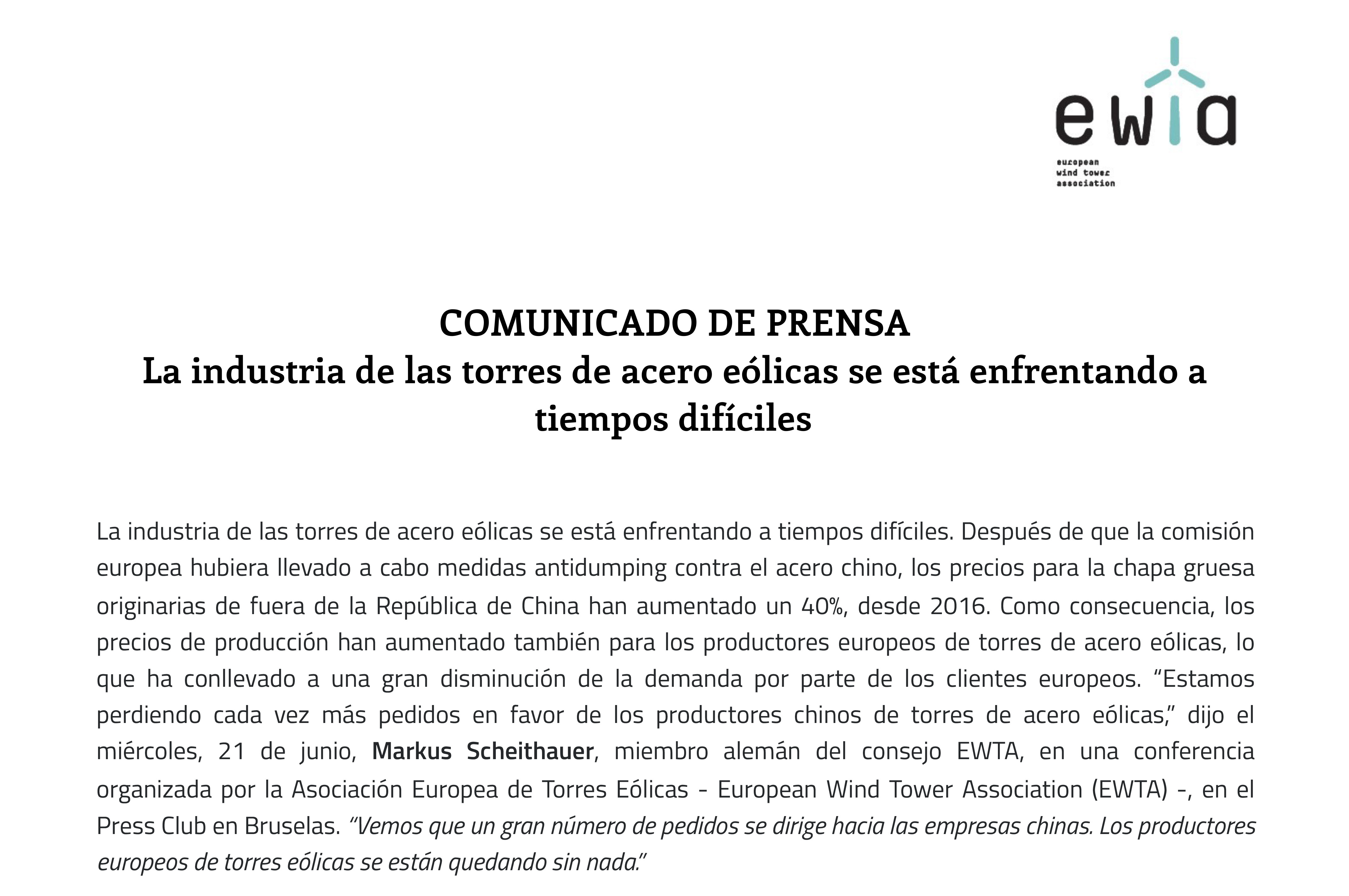 Europe’s wind steel tower industry is facing difficult times. After the EU Commission took anti-dumping measures on Chinese steel, prices for heavy plate originating from outside the People’s Republic of China have increased by 40% since 2016. As a consequence, European wind steel tower producers production costs have increased, leading to a drop in the demand from European customers. “We’re losing more and more orders to Chinese wind tower producers,” said Markus Scheithauer from Germany, EWTA board member, on Wednesday June 21st at a conference organized by the European Wind Tower Association (EWTA) at the Press Club in Brussels. “We see the large orders go to the Chinese companies. Wind tower producers in Europe are being left with almost nothing.”

Some of the side effects of this plunge in demand are already being felt, with many European wind tower producers being forced to accept orders below cost. “We’ve had to fire some people,” said José María Ávila, from Spain, EWTA Board Member. “And because we continue to see a negative trend, we might need to lay off more people. It’s a really difficult situation for us. And it’s not only the wind tower producers. Also our suppliers are starting to suffer.”

With a total installed capacity of 153.7 GigaWatts, wind-tower production now overtakes coal as the second form of power production. A new EU directive on Renewable Energy Directive aims to reach a target of 32% of energy produced by renewable methods by 2030. In the current environment, a large business potential could be lost to Asia if no action is taken.

“The last thing we are asking for is protectionism,” said Gonçalo Lobo Xavier, EWTA Executive Director. “But when we look at the prices that some Asian companies are offering, it makes one wonder: Are they perhaps receiving some form of aid that creates unfair competition with companies in Europe? We don’t know but we think it’s fair to ask and investigate. That’s all what we are asking for, that the EU looks more closely into these points.”

Created in 2018, EWTA is a Brussels-based association aiming to promote and support the European steel towers manufactures and to assure the provision of information, services and guidance to its members in areas related to EU and International policy affairs.

Some of the most affected countries are: Spain, France, Denmark, Germany, Czech Republic and Portugal, among others. “We just want a level playing field,” said Lobo Xavier. “In Europe we care about innovation, quality, sustainability, and the respect of social rights. We believe it’s only fair that all producers abide by the same rules. That’s part of what a free market is all about.”